John Huston’s tale of adventure in East Africa looks fantastic in this action-packed poster for The African Queen. Humphrey Bogart won his only Academy Award for Best Actor for his role as riverboat captain Charlie Allnut opposite Katharine Hepburn as a missionary who convinces him to attack a German warship. Bogart and Hepburn are depicted wonderfully in this Photograph. 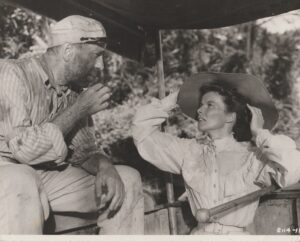