Barnacle Bill (released in other English-speaking countries as “All at Sea”), the 1957 Charles Frend English Ealing Studios screwball comedy (“The captain preferred the merry maids on land to the mermaids at sea!”; “Story and Screenplay by T.E.B. Clarke”; about a man from a long line of sailors who purchases a pier and renovates it into a dance hall, but when it is about to be repossessed, he is able to have it re-classified as a “ship”, and he offers “cruises to nowhere”!) starring Alec Guinness (in the title role as Capt. William Horatio Ambrose), Irene Browne, Maurice Denham, Percy Herbert, Victor Maddern, and Allan Cuthbertson 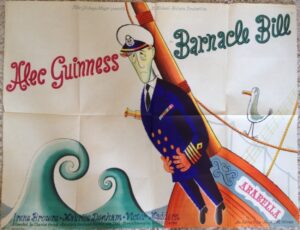