(High Quality print of the casino royal set design, by Stringer. Inside the casino Ultra Rare)

Of all the scenes in the film, the casino scene is perhaps the most relevant to the original Fleming story and Bond franchise, in no small part due to Peter Sellers’ particular involvement with the scene (he plays the Incarnation of James Bond at this point in the film) as he was desperately keen to keep the scene serious and true to the book. Renowned art director Stuart Craig was working as an assistant under Stringer on the film, and recalls: “[Casino Royale] was an amazing achievement design-wise. It was done on such a lavish scale, with cowboys and horses riding through this massive casino. Today, that would be a minimal amount of set and the upper parts of it would be a computer-generated matte painting – it wouldn’t physically exist. They had a lot more work to do in those days.”

The ambitious set design incorporates numerous Bond-esque elements, including a control room with hidden security monitors, and further rooms reserved for nefarious purposes. It is also interesting for indicating the backdrop artwork that was to be used in this scene, including artwork by Lyn Chadwick, Reg Butler, Keith Vaughan, Patrick Heron, Manet, Giacometti, Francis Bacon, Mondrian, Marini and, notably on trend for the time, Bridget Riley, all of which is explained by the peripheral autograph notes made around the actual design.

Stringer had a distinctive way of working. Art director Norman Dorme, who worked with him on many productions, notes: “Michael did storyboard sketches but he also did an aerial view of a set. All his set sketches were like that. No one else I worked with ever did that sort of thing. It gave a tremendous amount of information. They were very precise and detailed.” Source bloomsbury 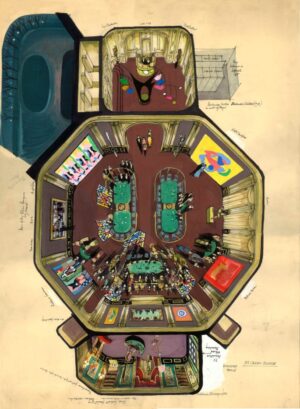