Dr. No marked the beginning of one of the longest-running film franchises in cinematic history, still going strong with the upcoming release of No Time to Die in April of 2021. Ian Fleming gave his beloved leading character many traits, including a gift for gambling, which is featured in each Bond film. Following Fleming’s introduction of Bond to the world in his 1953 novel Casino Royale, in which Fleming specifically created readers’ first encounter with Bond in a casino to present the spy with qualities of a gentleman, Dr. No begins in a London casino when Sean Connery utters the famous line, “Bond. James Bond.” Collectors should note that this is the authentic gambling plaque loaned to the studio for production use by the Le Cercle casino at the Les Ambassadeurs Club in London. Obviously, no one can be completely sure which ones were visible, in the film, but they are from that exact time!!

Indications of use include some surface scuffs and scratches, as well as faint adhesive stains and remnants on the currency side of the plaques and along the edges. There is also a bit of bubbling in the printing and gloss on the side showing the image of the building, and the plaques show some slight warping. 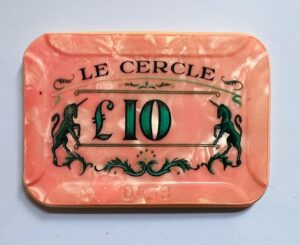